AOS organized a two–days visit into the areas inhabited by the last Egyptian vultures (EV) in Albania (currently the local population consists of less than 10 pairs). The main activities during this visit were birdwatching and agro-tourism involving key representatives from decision making institutions with the aim to use this as a unique and special opportunity to raise awareness on the need for immediate action to prevent the extinction of this emblematic a species for Albania (locally called Cuckoo’s Horse). 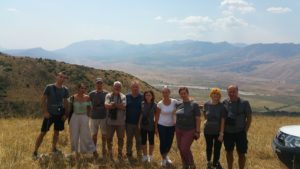 The Deputy Minister of Tourism and Environment, Mrs. Ornela Cuci, was among the participants and she was crucial for spreading the message for the conservation of the species. The Deputy Minister used social media to share the news and she even shared the information with the Prime Minister of Albania, Mr. Edi Rama. At the same day, last Saturday 31st, the Prime Minister posted pictures of the EV (provided by AOS) in his own Facebook account together with a message on the monitoring and preservation efforts undertaken in Albania. By the 4th of September, his posting has been liked by more than 4.600 people, shared more than 315 times and perhaps viewed by many, many more people. What is more, the Deputy Minister gave credits to AOS and the project in her own Social media communication, as follows: (posts that are shared  by the Deputy Minister of Tourism and Environment no.1, no.2, no.3)

Following the above, AOS used its own social media accounts (Facebook and Instagram) to spread the message by stressing that the highest level of the Albanian executive and policy-making institutions are now joining the efforts for the conservation of the Egyptian Vulture. His Excellency, PrimeMinister, Mr. Edi Rama and the Deputy Minister of Tourism and Environment, Mrs. Ornela Cuci are sharing pictures from the field monitoring of the Egyptian Vulture and messages for its preservation in Albania.

Besides, AOS discussed with the Deputy Minister for other joint efforts such as the Anti-poisoning road map, the workshop on wildlife crime and other awareness efforts in the stronghold of the EV in Albania. She seemed interested and invited AOS to present their approach in a meeting at the Ministry of Environment.

Last but not least, the newly elected Mayors of Gjirokastra and Dropulli, who were not able to attend the event, were very supportive too. AOS communicated with both of them and they were very open for further meetings, joint activities etc. Considering their crucial local role in territory management, AOS believes having them on board will help a lot to implement local activities targeting the conservation of the EV.