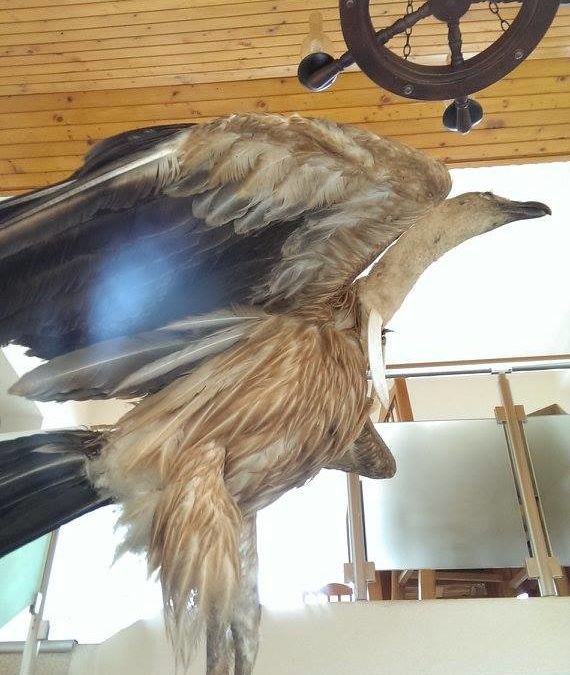 Vultures, although a rarity in the country, have often been subject of poisoning, trapping and poaching with evidences registered even in recent years.

An estimation of the impact of IKB on vultures in Albania was undertaken in 2018, based on expert opinion and data collected through relevant stakeholders and social media groups. It shows that at least 1-3 individuals of vultures species are approximately killed every year.

Griffon Vulture is often subject of poaching as it occurred in 2008 in Kukes, north of Albania, where an individual was killed for taxidermy purposes and it is today exposed in a restaurant in the city.

Another Griffon Vulture was trapped in Lura (north of Albania) after being apparently injured due to electrocution. Although it somehow recovered, this individual was kept as a pet species for almost two years until its fatal electrocution in 2015.

In addition, a tagged Griffon Vulture (from Serbia) was trapped in 2016 in Fushe-Kruja (nearby Tirana) showing signs of poisoning. It is very likely that the species was killed afterwards despite AOS efforts to release it.

Meanwhile, in the stronghold of Egyptian Vulture in southern Albania, cases of poisoning are still occurring as a measure taken by locals who use poison baits to control either large or small carnivores perceived as predators of livestock and animal husbandry.

In 2016, a local shepherd admitted to our trusted sources that a Golden Eagle and several others birds of prey were poisoned due to such a practice.

Despite lack of clear evidences on poisoning, it is very likely that Egyptian Vultures suffer from secondary poisoning too. According to Protected Areas Authorities in Gjirokastra, an individual of Egyptian Vulture was found dead by local shepherds just above Glina village, nearby a small stream, by the end of 2017. It was apparently an old carcass but the shepherds could verify it through the remaining feathers.
​
As a summary, IKB is still having an impact on vultures in Albania. Considering the rarity of the species, it seems that IKB plays quite a role in limiting vulture populations in the country.

This action was undertaken in the framework of the project “Egyptian Vulture New Life”  supported by Life program.