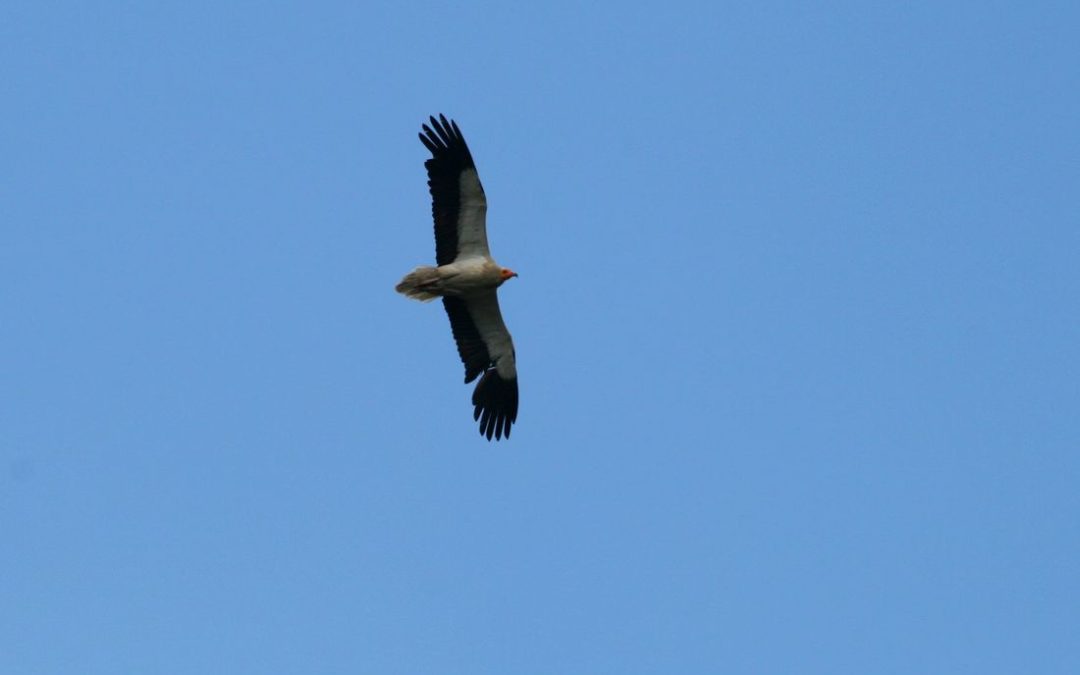 Of the four breeding vultures species in Albania, nowadays only Egyptian Vulture continues to breed in our country, even though critically endangered. Therefore, our awareness for our last breeding vulture should be at its peak!

Egyptian Vulture is a globally endangered (EN) species whose population is facing a constant decline. The same situation is present also in the Balkans where only 50 pairs of them remain, from which up to 5 pairs are estimated to breed in our country.

A number of different reasons has led to the decline of the Egyptian Vulture population, such as: poisoning, electrocution, collision, poaching, illegal wildlife trafficking, etc.

Driven from this major threat (which leads to extinction), experts and institutions from all over the world have joined forces to recover Egyptian Vulture populations. Part of this initiative is also our country since 2002.

AOS carried out a five day expedition in the Egyptian Vulture’s territories on April 2019 (18-22 April 2019), based on the international monitoring protocols. During these five days, our team (of 5 persons) undertook a survey in 12 recognized territories in the southern part of Albania, in the region of Saranda, Gjirokastra and Përmeti.

The expedition proved once again that the Egyptian Vulture is quite a difficult and in the same time impressive species whose observation, especially of its behavior, is an outstanding experience with a lot of twists and turns.

Egyptian Vulture is quite an intelligent species which is very discreet and hides very well its nest. Nesting sites are relatively rocky, dry, exposed to harsh sunlight and it’s extremely difficult to stay in the same place for a long time. In such conditions, it is almost impossible to understand a lot about this bird with just one visit.

In each of 12 monitored territories, we spent at least 3-4 hours. During these long hours, we checked the area for the presence of the bird with the use of binoculars and telescopes.

Despite numerous controls and long and difficult observation hours, we found the Egyptian Vulture in only two territories which proves once again that the Albanian population of Egyptian Vulture is on its most difficult days. Meanwhile, in those territories where the bird was present, AOS spent a considerable amount of time to understand its behavior, habitats, nests, and to identify each of the birds based on their distinctive features. Most of the time, it is difficult to tell one individual from another but there are small details, such as: missing feathers or specific marks on the bird’s plumage that can make the difference.

Monitoring of Egyptian Vulture (from identifying the presence of the birds in the area to the localization of the nests) is not an easy task. Therefore, it is important to select the most effective method from our experience on the field and at the same time equally important is the exchange of experience with experts from other countries.