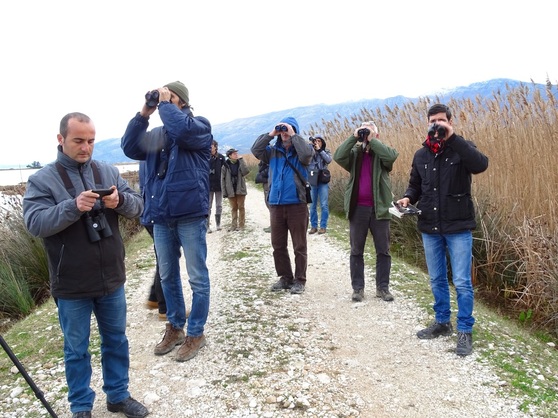 On behalf of the participating organizations and institutions, Albanian Ornithological Society (AOS) is happy to announce the results of the International Waterbird Census (IWC) 2016  in Albania.
IWC 2016 in Albania covered 16 different wetland sites and it was carried out by 31 experts and participants, part of 11 NGOs and governmental institutions. In total, 60 species of waterbirds were registered during the IWC 2016 in Albania with a number of 98564 individuals.
It was a massive and pleasant experience, preceded by a training workshop aiming to build and strengthen capacities of National Agency for Protected Areas and Regional Agencies for Protected Areas on bird identification and monitoring. Some of the census activities were followed live by national media and the event was broadcasted by several TV Stations
In difference from previous year, the number of waterbirds recorded was lower, but we were pleased to see that in several areas birds were less shy and tended to stay near humans. It shows that hunting ban in those coastal areas is providing good results and it is boosting the potentials of the country for birdwatching and awareness activities. The latest finding is also an evidence valuable to the current governmental efforts aiming to extend the hunting ban for some other years.
Among the sites visited, we would mention Divjake-Karavasta as the site with the highest index of biodiversity showing thus a good balance between the high number of waterbirds and the high species diversity. Other sites of particular importance were Shkodra lake (Albanian part), followed by Macro Prespa (Albanian part)  with high number of waterbirds, Narta saltpans and Thana lake as good feeding and roosting sites for waders, Kune-Vain for dabbling ducks and Karpen fishponds where we had the chance to register 11 individuals of Ferruginous Ducks.
Overall the most common species was the Coot (Fulica atra) with more than 50% of the total number of waterbirds. Other frequent species included Black-headed Gull (Croicocephalus ridibundus), Wigeon (Mareca penelope), Lapwing (Vanellus vanellus) and the Teal (Anas crecca).
The wetlands visited offered also roosting and feeding sites for 7 species of birds of prey with a total number of 116 individuals. The most common among them was the Marsh Harrier (Circus aeruginosus) with circa 50% of the birds of prey. The southern part of Kune-Vain offers a very interesting roosting site with more than 30 individuals observed at the same spot.
Finally, this event might have not happened without the contribution of Italian Embassy – Development Cooperation Office together with the National Agency for Protected Areas. We would also like to highlight the professional support  provided by our colleagues from LIPU, BSPB and SPP as well as to Borut Sturmberger. Our warmest thanks go to every expert and participant for their hard work in rather harsh weather conditions.
The above data and the respective report would be available for the public, state institutions, NGOs participating in the event, donors and beneficiaries as well as Wetland International.