To the attention of:   Mr. Blendi Klosi, Minister of Tourism and Environment

The National Council of Territory Regulation

We, a coalition of national and international organizations, are aware of the plans that the Albanian government has for the construction of an international airport within the territory of the protected area “Vjosë-Nartë Protected Landscape” (Category V according to IUCN).

While we appreciate initiatives from the Albanian government that aim at investments that give a huge contribution in the socio-economic development of our country, we are deeply concerned about the actual location of the project, as the construction of an airport there would irreversibly damage the ecosystem of “Vjosë- Nartë Protected Landscape”. Such an investment would bring about uncontrolled and unsustainable development models that would irreversibly damage the natural values and resources of the area.

Through this letter, we want to bring to your attention that the Narta Lagoon and the surrounding ecosystem represent one of the largest and most important wetland ecosystems of Albania and the Mediterranean. Besides being part of the Albanian’s Protected Area Network, Vjosë-Nartë is part of almost all international ecological networks that a natural site in Albania could be a part of. This wetland is recognized as an ‘Important Bird Area’ (IBA) with ID site “AL005”. Furthermore, this area is recognized as ‘Key Biodiversity Area’ (KBA), known as (Vjosë-Pishë Poro-Laguna e Nartës) with ID site ALB24. Vjosë-Nartë meets all the criteria to be classified as a ‘Wetland of International Importance’ under the Ramsar Convention, which Albania has ratified. Finally, it is officially nominated by the Albanian government as a candidate site for the Emerald Network under the Bern Convention, with ID site AL0000008 and area 19.412,00 hectares.

More than 200 wild bird species have been recorded in the area. From this number, 33 species are listed as threatened on the Red List of Albania Flora and Fauna, with 8 bird species having Critically Endangered (CR) status, 9 classified as Endangered (EN), 13 bird species classified as Vulnerable (VU) and 3 bird species carrying the Low Risk (LR) status. Moreover, 123 species are listed in Appendix II of the ‘Bern Convention’, a convention which Albania has ratified. Appendix II of the ‘Bern Convention’ lists all species which require special protection. Further to that, 43 species are listed in Appendix I of Emerald Network. In this appendix are listed all the species which require specific habitat conservation measures. 7 species are listed in Annex I of the Convention on Migratory Species (CMS), which lists migratory species whose populations are estimated to be threatened partly or in all of their distribution area. Under this convention, Albania has signed the ‘Agreement on the Conservation of African-Eurasian Migratory Waterbirds’ (AEWA), which concerns 92 species found in Vjosë-Nartë and obliges signatory parties to create or preserve adequate habitat conditions for these species. Meanwhile, with regard to bird populations within the EU, 23 species are of particular conservation interest as their populations have entered one of the threatened lines according to the International Union for Conservation of Nature (IUCN). Finally, 62 species are listed in Annex 1 of the Birds Directive, which obliges member states and those countries that have signed the Stabilization and Association Agreement with the European Union to proclaim Special Protection Areas (SPAs) for these species.

Vjosë-Nartë is the most important breeding site in Albania and one of the most important in Europe for several species of Charadriiformes order, which have populations that go beyond 1% of the total population within the biogeographic region. Such is the case of the pied avocet (Recurvirostra avosetta), the breeding population of which, within the Vjosë-Nartë Protected Landscape, is more than 1% of the total population in the biogeographic region of Southeast Europe, the Black Sea and Turkey. In addition, the area regularly sustains more than 1% of the populations of two species of the Mediterranean and the Black Sea region, such as the Dalmatian pelican (Pelecanus crispus) and flamingo (Phoenicopterus roseus).

Vjosë-Nartë wetland complex is a world-renowned area for habitat and wildlife diversity. These values ​​have been widely covered by national and international media such as The Guardian, The Telegraph, Euronews, etc., emphasizing the importance of preserving them. The biodiversity of Narta Lagoon has been mentioned and appreciated also by you Mr. Prime Minister, on your online social networks, emphasizing the greatness of the flamingo population and the new species encountered everyday by biologists in this ecosystem.

Building an infrastructure of such dimensions as the proposed airport would not only irreversibly damage the magnificent landscape of the area, but would also dislocate all these species and values ​​mentioned above, which have been proudly recognized also by you Mr. Prime Minister. Furthermore, the construction of the airport in the planned location poses heightened risks for the safety of airplanes and people. This area lies in one of the most important sections of the Adriatic Flyway, in which, hundreds of thousands of birds forage and take shelter during the migration seasons. Some of these species, like the pelicans, herons, gulls, flamingos, etc., that are abundantly present throughout the year are of such dimensions that a potential collision with airplanes could bring tragic consequences. Cases of airplane malfunctions or even crashes caused by the collision with wild birds are well documented. This fact, strongly dictates that Vjosë-Narta is an inadequate location for this large public investment.

Our coalition of environmental organizations declares that the construction of such infrastructure within the protected area goes against the Albanian and international legislation, violating in general the environmental legal framework of the country and, specifically, the law of Protected Areas and a number of conventions which Albania, as a sovereign country, with integrity and aspiration towards the European Union, has ratified. This issue was mentioned even in the Progress Report 2020 for Albania (Page 106, 2nd section) by European Commission:

“The legislation on strategic investment raises concerns for the protection of biodiversity, as it may allow large tourism and industrial investments in protected areas, e.g. the proposed airport in the Vjosë-Nartë area. This conflicts with other national laws and with international biodiversity protection conventions that Albania has ratified.”

Thus, this plan, among others creates obstacles on the integration path of our country in the European Union, which has been the main aspiration of Albanians in the last 30 years.

We are convinced that Albania has no reason to lose such natural values on the Adriatic coast. Therefore, we ask the Albanian government to cancel the construction of the airport within the protected area. The Vjosë-Nartë Protected Landscape should be oriented towards the development of sustainable tourism, eco-tourism, and agro-tourism. This area has great potential for the development of these kinds of tourism, which go hand in hand with nature and do not destroy it.

In the name of the coalition represented in this letter, we express our readiness to engage in constructive, open, and transparent discussions with you, to find win-win solutions for people and nature.

Please see the letter in the Albanian language sent to the authorities here.

Albanian Society for the Protection of Birds and Mammals

Bulgarian Society for the Protection of Birds

Centre for Study and Protection of Birds (CZIP), Montenegro

Institute for Nature Conservation in Albania

Lets Do It Peja, Kosovo

Protection and Preservation of Natural Environment in Albania

Society for the Protection of Prespa (SPP), Greece 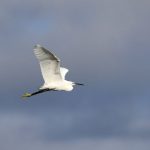 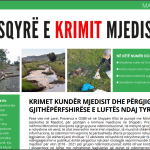 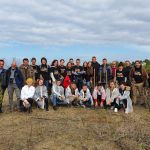