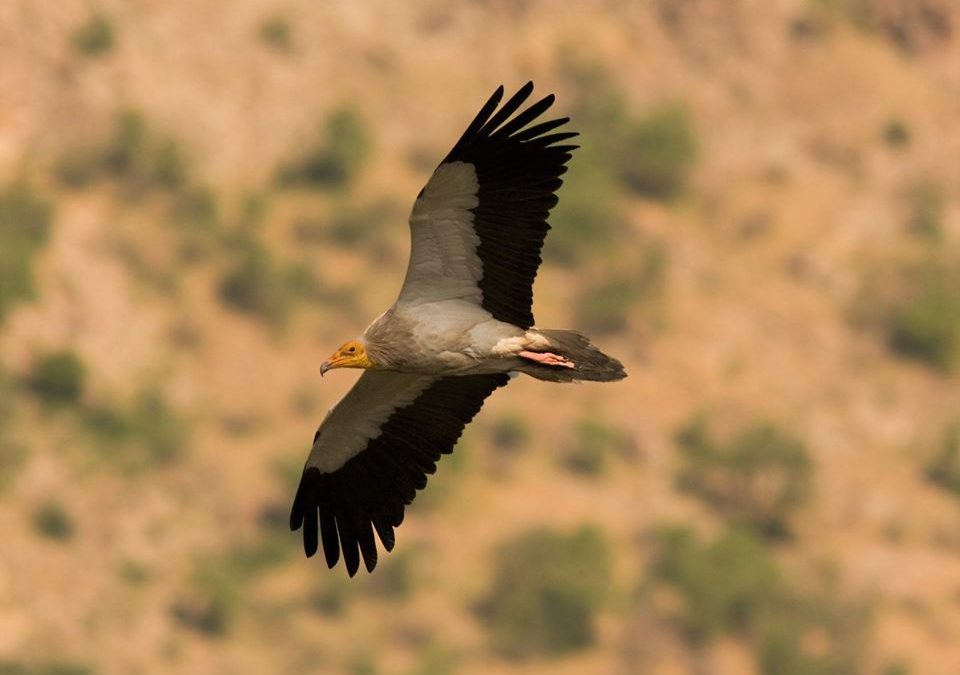 Only 6 breeding pairs and 3 single adults remain today in Albania and all of them along Vjosa (Aoos) river and its tributaries such as Drino river, Benca river, Shushica River, Kardhiq stream, etc. Those only nine territories are just a mere sign compared with the presence in 14 territories in 2004. Thus, the Globally Endangered Egyptian Vulture has lost in just 15 years circa 35 % of its territories in Albania. The only remaining territories occur today only in Vjosa watershed.

This bond was the reason why an Egyptian vulture was named on the river. In 2015 a team of the Hellenic Ornithological Society (HOS) tagged with satellite transmitter an adult female Egyptian vulture and named her Aoos (Aoos is the name of the river in Greek, Vjosa– in Albanian). At this moment the bird is on her way back to its home in Vjosa valley, covering a territory that extends in both countries, Albania and Greece. Along her flyway, Vjosa faces many threats such as poisoning, electrocution, and collision with powerlines, direct persecution, etc. But in her breeding habitats, she will not be safe either. Her nest is threatened by the ambiguous plans to develop hydropower plants along the Vjosa River Valley. And this will be devastating not only for the iconic Egyptian vulture but also for many other flagship species under high conservation concern in Albania.

The river and its tributaries are today threatened by plans to develop hydropower plants that will change the habitats of Vjosa (Aoos) forever and for the worst. Two large hydropower plants (Poçemi and Kalivaçi) are planned in Vjosa(Aoos) river, another one in Benca river, another one in Shushica and some other smaller ones in Kardhiq, Zhulat, etc. Habitats will be lost either by lakes created by the large hydropower dams or by water being diverted and devoured in the smaller ones. Vjosa (Aoos) might soon lose its wonderful natural diversity and all the species that make the river so unique.

The loss of habitats of the Vjosa river means the loss of the last territories of the Egyptian Vulture in both Albania and Greece. Thus, the two countries will not lose only a river. Both countries will lose numerous species and above all the Egyptian Vulture. Nature in both Albania and Greece will lose a symbolic species embodied for so long in the cultural and landscape heritage of the region.

For many people, Vjosa (Aoos) river is the only and the last free river in Europe. This magnificent river takes its origin from Mount Pindus in Greece where people call it Aoos and runs through southern Albania under Vjosa’s name until meeting with the Adriatic Sea. It is exactly this free run that enables us to enjoy today the spectacular view of Vjosa valley including high mountains, forested slopes, gorges, floodplains, river meanders and enormous beaches of pebbles.

But Vjosa (Aoos) is not just a spectacular landscape. The river valley is home to numerous habitats and numerous species of insect, fish, amphibians, reptiles, birds, and mammals with some of them endemic to the region and many of them being globally endangered. But for bird lovers, above all and yet at the same time, Vjosa (Aoos) river and its valley, represents the stronghold for the Egyptian Vulture or Cuckoo’s Horse in both Albania and Greece. This Globally Endangered species, threatened worldwide with extinction, finds in Vjosa valley its perfect breeding habitat. 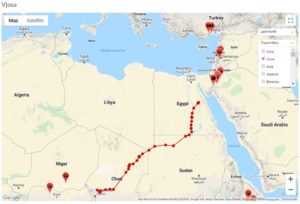