White Storks are coming too!

We’re already in the infancy of the spring season, the time of the year when migration birds leave their wintering grounds including here the famous bearer of newborn babies to expecting parents and the widely beloved symbol, White Stork. The first White Stork for this year 2020 in Albania was spotted six days ago (25th of March) in Shkodra (Figure no.1). Meanwhile, the White Storks in Fier, Gjirokastra, and Saranda still haven’t arrived, we expect that they will very soon arrive from migration.

Likewise, a number of White Storks have already arrived in the neighboring countries from their wintering grounds. In Kosovo, North Macedonia and Greece, they have shown up since 10 days while other individuals are still migrating. As Bela, this White Stork tagged in 2019 with a satellite transmitter in Slovenia (Figure no.2).

White Stork is not an endangered species when we speak globally but, unfortunately, a quite different reality is present in Albania. The nests of White Storks in Albania are unfortunately extremely rare. Only 5-6 of them have been active in the last five years, a very low figure if we compare it with the distant past when White Storks nests were present in almost all main urban areas. Aside from the decrease in the number of nests due to persecution and loss of foraging habitats, it seems that many White Storks could not survive to the migration and wintering or their last Flight for Survival and consequently do not return to their nests in Albania.

The dangers that White Storks faces during their epic migration

White Storks, as many other migratory birds, are faced during migration with a multitude of threatening factors and mostly with poaching or intentional killing, collision with energy infrastructure (wind turbines, electric lines, etc.), electrocution, etc. While we could not control the threatening factors during migration, our minimal obligation is to ensure good breeding conditions for the White Storks, as we installed a breeding platform in cooperation with OST (Figure no.3, 4). The breeding platform was installed on March 8, 2019, and it resulted successfully. Five days later, on March 13, 2019, the White Stork returned to his new and safe home. (Read more on the previous articles)

Despite the difficult working conditions due to COVID-19, AOS continues its efforts to include other structures in our conservation in order to increase the number of nesting White Storks in Albania. 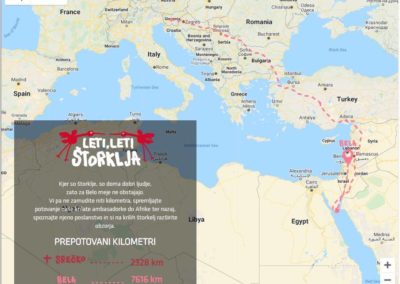 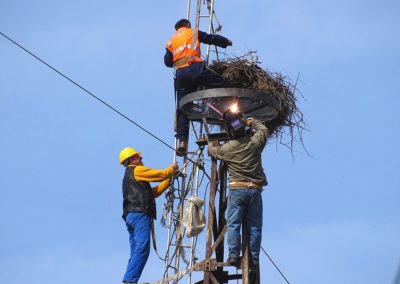 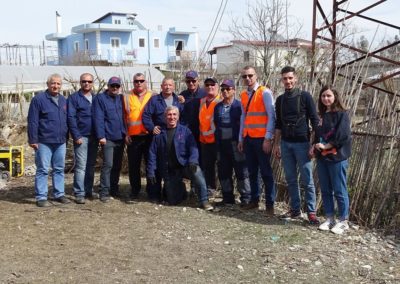